Justin Somper is the bestselling author with the Vampirates sequence.

The first title, Vampirates: Demons of the Ocean debuted in 2005 and has sold over 100,000 copies to date in the UK. Justin was dubbed “The Next Big Thing” by Sunday Times Magazine while, in Waterstone’s “Harry Potter Report”, the chain’s buyers selected Demons of the Ocean as their top recommendation for fans of Harry Potter. The Sunday Times said Vampirates “promises to be an addictive series”. The Evening Standard welcomed “a vivid and bloodthirsty debut”, whilst The Times acclaimed “a clever combination of two genres that could make it as popular as Pirates of the Caribbean”.

WHO’S A BUSY BEAVER THEN?

As if writing each book in the sequence isn’t enough, Justin also finds time to reply to the comments and queries left by his readers on vampirates.co.uk and Facebook. To celebrate a launch of VAMPIRATES: EMPIRE OF NIGHT, Justin participated in a live event with bittenbybooks, where he chatted live on-line with fans globally.

Traveling to festivals, schools and libraries is a highlight of Justin’s year, when he gets the opportunity to meet avid readers and aspiring young writers. Since the publication of Vampirates internationally, Justin has completed events throughout the UK, in France, Australia, Sweden, and the USA – where it’s not out of the question for fans to drive across state lines for the chance to meet Captain Somper!

On the lookout for more stuff? Why not sign up to the VAMPIRATES CREW – you’ll get Justin’s newsletter, have access to exclusive competitions and hot news before anyone else!

See what Justin has to say for himself when faced with tough questions on writing Vampirates, sword-fighting, and the things he couldn’t possibly live without.

Justin talks about the world of the Vampirates and shows us around his writer’s den – where the magic really happens!

The brand-spanking, chock full of good stuff, JUSTIN SOMPER WEBSITE will launch in JULY 2012. Be sure to check back in a few short weeks for some EXCLUSIVE news about Justin’s LATEST WRITING PROJECT!

In 2005, Justin published the first in a six-book sequence, VAMPIRATES. The idea had come to him as a “Eureka!” moment, when “the word ‘Vampirates’ just fell into my head”. That moment proved genuinely life-changing as Justin soon found himself with a six-book deal, with Simon & Schuster in the UK, and with publishers for the books in 25 languages and 35 countries worldwide. 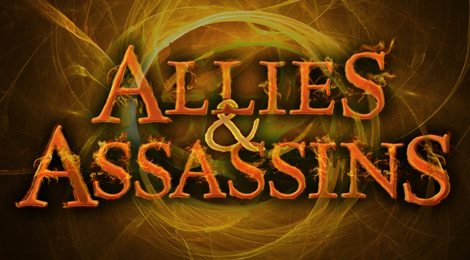 The first book in the ALLIES & ASSASSINS sequence is published in the UK in September 2013 and in the USA in Spring 2014. Translation deals have already been signed with Brazil, Germany and Poland. Justin is about to begin work on the sequel, which will follow in 2014.